You live on in our Hearts BEAR 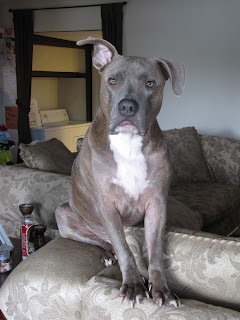 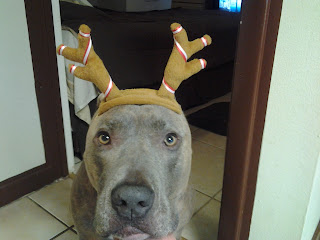 Bear was rescued after being passed from home to home, misunderstood.  He was a foster with Lost Angels for almost two years before he found his forever family, and it was worth the wait.  He will be missed dearly by his foster family and his forever family.

BEAR
3/31/06-3/26/17
You  brought love, hope, and humor into our family since the day you arrived. You made an impression on anyone lucky enough to meet you.
You will be missed by us all.
We will never forget you and never stop loving you.
REST IN PEACE BEAR.
Posted by Lost Angels Animal Rescue Family at 6:05 PM 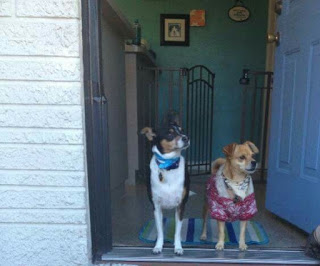 Hi there!  My name is Scooter (formerly Clyde). I’m the debonair tri-color rat terrier; and this is my Diva sister Chiquita.  My mom first saw me on Facebook Lost Angels animal rescue site and I reminded her so much of my other sister Missy (also a rat terrier) that she just had to have me!  Unfortunately, Missy passed away but I have a new sister Chiquita and we spend our days at doggie daycare and we have a lot of fun with the other dogs.   I’m so glad that my mom rescued us.
Posted by Lost Angels Animal Rescue Family at 10:10 AM 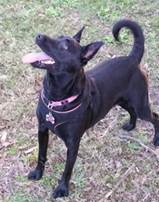 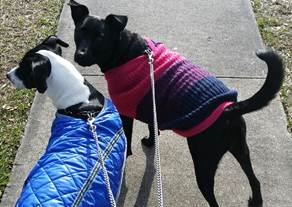 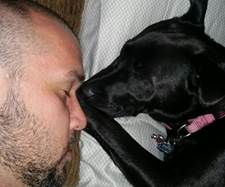 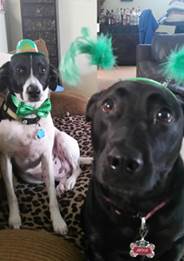 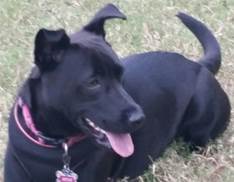 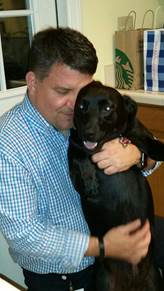 As a pup this sweet girls time was up at the shelter. When one of the founders of Lost Angels saw her on the list she pulled her to safety. Once in a foster home it didn't take long for this beautiful special girl to find her forever home. Below is an update from her dad.

2 years ago on 4-13 we adopted Mya from your rescue. I wanted to send you some pictures showing her growth and the life she is living. Armando and I are so blessed with this little angel. She has changed our lives for the better and love her beyond words. She has grown up to be an extraordinary dog and member of our family. She has become our little protector and I have even caught her “patrolling” the house in the middle of night going to all the doors and the sliding glass door just looking into the yard. She has also become a big sister to our 2nd rescue, Max and the bond those two have developed is truly amazing. They do everything together and she mothers him to the fullest. Please enjoy these pictures as we have enjoyed making them. Hope all is well with you

A Boy and His Dog ~ Shyla 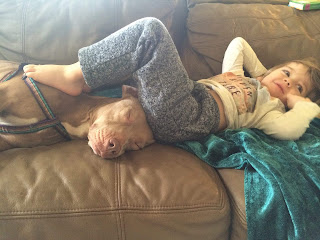 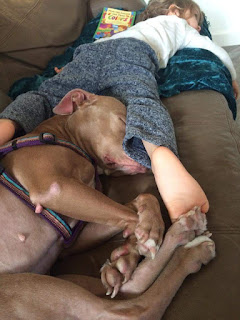 
UPDATE 2/2: Just wanted to share a picture of Chloe and her new mom, couldn't ask for a better home, and they love her!! Thanks Jacquelin Love Wester!!
UPDATE 1/20: Chloe got adopted!! She has SUCH a wonderful new home, and has turned out to be the sweetest, most gentle little girl!! THANK YOU GOD - AGAIN!!
UPDATE 12/10: WE HAVE A FOSTER HOME!! YAY!!! Thanks to EVERYONE that has helped and shared and prayed for our little girl! If this foster home doesn't work out, we even have a back-up in place. THANK YOU GOD!
New pix of Chloe attached. Please continue to share, I'd love to find a foster home or permanent home before this Saturday, 12/12 - she's scheduled to go to a no-kill shelter then, and I really don't want to do that unless I have to!
UPDATE MONDAY 12/7: Up until today the girls at the clinic have been afraid to let Chloe run in the fenced-in play yard, because they were afraid she would get scared, and would be hard to catch. But since she doesn't leash-walk, they let her run a bit today. She had a ball, and ever since has just been a lap dog! Wants to be picked up all the time. So cute!
UPDATE: She is H/W negative, and weighs on 15 lbs. Just heard from the vet - he thinks she is just over a year old, exam was fine, she's healthy. Was very sweet during exam. Said she was a little nervous, but when she's scared she just shows fear and not aggression. Please share, she's still sitting at my vet's office in a cage....
FOSTER HOME DESPERATELY NEEDED - TAMPA AREA! I found this little girl (I named her Chloe) running down a really busy road yesterday. Took two hours, a McDonald's hamburger and a whole can of dog food to catch her! She's very street-wise, and with the help of a lovely older couple, we were finally able to catch her in their pool enclosure. She's about 17-18 lbs, and young. Lost Angels is overflowing, and I had another group that was going to take her, but now they are full and may not be able to. Right now she's boarding at my vet (read that $$$), and I sure can't take her here, with all my sick little old ones. She is not chipped, and my attempts at finding her owner have come up with nothing. I swear she's the same dog I saw two months ago in a field about 5 miles from where she was caught! She's VERY sweet, just very scared!! Once I finally got her in the car, she went sound asleep. She DEFINITELY needs a home with a securely fenced area. If anyone can help, PLEASE message me ASAP. Thanks!!
Posted by Lost Angels Animal Rescue Family at 4:46 PM 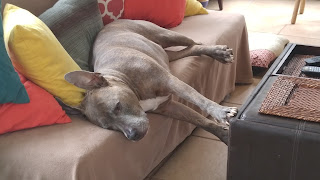 Bear Boy relaxing on the 5th Anniversary of his adoption!
Posted by Lost Angels Animal Rescue Family at 6:11 PM 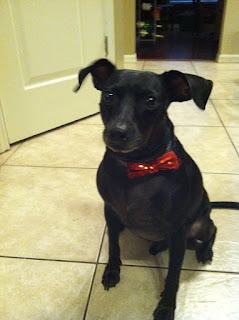 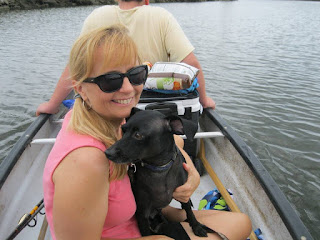 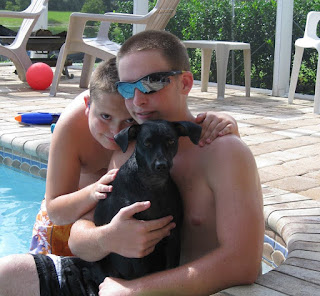 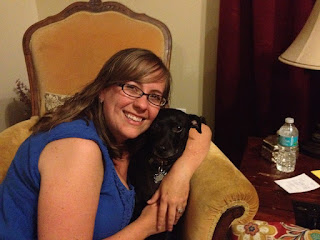 Oh how this sweet boy will be missed.  Batman came to Lost Angels about 8 years ago.  Desiree got a call about a dog who had been run over.  Come to find out, he had been run over by his own "family" and left in pain and agony for two weeks.  We took him in immediately and got him the help he needed.  Batman had to have a metal plate and 7 pins put in his leg, it never slowed him down for a minute.  He recovered wonderfully and became my foster.  Around this time my parents were looking for a dog for themselves and my little brothers.  I just knew Batman was perfect for them.  Boy was I right!  He stole all of our hearts.  Batman was an affectionate boy with soulful eyes who loves to snuggle.  He was so funny when someone he loved came over that he hadn't seen in a while and would run around with excitement and whine a little bit until you showed him the attention he deserved.  He became a best friend to my brothers, and a fourth child to my parents.  He loved to sneak food off the kitchen counters when no one was looking (we are still not sure how he always managed to get up there)!  He had a special hiding place for his stash underneath my parents bed.  He had a wonderful life with my family and went to dog parks, camping, kayaking, and on trips to NC and the beach.

Batman was diagnosed with cancer.  It started on his foot and my parents had it removed several times.  Unfortunately, it was a very aggressive form of cancer, and a few months ago the decision was made to stop putting him through surgeries and allow him to live the rest of his life as comfortably as possible.  The vet actually can't believe he made it as long as he did.  As my brother Jake said, he kicked cancers butt for as long as he could to stay with us.

This past week, he had a very bad night, and his mommy knew it was time.  She held him in her arms while we let him go to rainbow bridge.

Letting go is never easy, but I find so much comfort knowing he was given the very best of everything while he was here.  Knowing that he received so much love that so many dogs never get to experience.
.


By the edge of a woods, at the foot of a hill,
Is a lush, green meadow where time stands still.
Where the friends of man and woman do run,
When their time on earth is over and done.
For here, between this world and the next,
Is a place where each beloved creature finds rest.
On this golden land, they wait and they play,
Till the Rainbow Bridge they cross over one day.
No more do they suffer, in pain or in sadness,
For here they are whole, their lives filled with gladness.
Their limbs are restored, their health renewed,
Their bodies have healed, with strength imbued.
They romp through the grass, without even a care,
Until one day they start, and sniff at the air.
All ears prick forward, eyes dart front and back,
Then all of a sudden, one breaks from the pack.
For just at that instant, their eyes have met;
Together again, both person and pet.
So they run to each other, these friends from long past,
The time of their parting is over at last.
The sadness they felt while they were apart,
Has turned into joy once more in each heart.
They embrace with a love that will last forever,
And then, side-by-side, they cross over… together.
Posted by Lost Angels Animal Rescue Family at 8:37 AM

Interested in sharing your story of adoption with us? Please submit your story and photos and it will post to our blog within 24 hours or less. Your story means a lot to our volunteers and foster families. Thanks for posting!

Donate to help a homeless animal

Pet Health Coverage with a Cause

Learn how you can save on vet bills and help homeless pets too. 10% discount for Fans of Lost Angels Animal Rescue. Use code: LostAngels